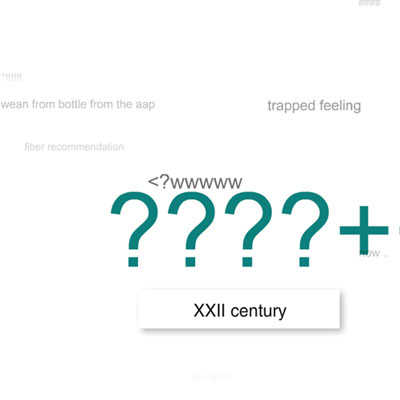 Magali Desbazeille discovered pencils and paintbrushes in 1974, when she was 3 years old; when she was 7, she hesitated between becoming a drawing teacher or a pastry chef; when she was 8, she won her first drawing contest and received her award at the Hôtel de Ville de Paris from Bernadette Chirac; she studied at the Beaux-Arts in Paris, at Hunter College in New York, at the Fresnoy in Tourcoing, but not in Berlin; she met the composer Siegfried Canto in 1999, through Internet, on the Ircam forum, and froze the system with an attached document that was too big (bigger than 62k); she works with Siegfried regularly; works with the choreographer Meg Stuart, but not with Paul Bocuse; her installations, performances, shows have been seen in France, Belgium, Austria, the Netherlands, Canada…; at Saatchi Gallery / Wanderland exhibition by Hermès, at the art center Motorenhalle in Dresden, at the Ferme du Buisson, at the Mons CECN, at the Centre Georges-Pompidou, at the Maison Européenne de la Photographie, at Z33, at the Schirman & de Beaucé Gallery, at the Uqam Gallery… almost never in the South but recently, at the art center “La Panacée” in Montpellier; should read Les Mots et les Choses by Foucault (it’s on the list); but reads and has reread 3,279 times the same book every night for her sons in Montreuil, where she lives and works; combines documentary and fiction, fine arts and performing arts, new technologies and tinkering; would like to know what people are really looking for; wondered for a long time what new technologies would do to language; and is now asking questions about how our major institutions quantify the unquantifiable…

She did a digital creation residency at the Maison Populaire de Montreuil in 2016 and is currently working on statistical wallpapers as support system for political ideology.